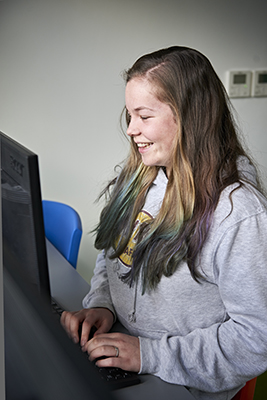 Former Richard Huish College and Castle School student, Sophie Bareham, has been accepted onto an Internship with JPMorgan Chase as a software engineer. Sophie was one of only five accepted out of a staggering 800+ applications and on top of that, was considered one of their top candidates.

JPMorgan Chase, a leading global financial services firm, offer a range Internship programs designed for undergraduate students to work during their off-time to help explore the firm and gain hands-on work experience before applying for a full-time role. The rigorous interview process took place in separate rounds which included a Coding Hirevue interview, where Sophie had to solve and pass all test cases on two coding questions within 30 minutes, followed by justification for every answer. There was also a standard behavioral interview which was followed by a technical interview where she had to explain how to solve the coding problem the interviewer would give, whilst taking them through the process.

Unsure of her future career plans, Sophie initially completed one year of A Levels at Huish before transitioning onto the Vocational Extended Diploma in Digital, IT and Computing after realising her passion for IT and Computer Science. Sophie, who is currently at Cardiff University at the National Software Academy studying the BSc Applied Software Engineering programme, was considered as one of the top candidates out of over 800 applications for the Internship, which will take place over the course of Summer 2021. There is also the potential of a graduate role in 2022 once she has finished her University Degree. Thrilled by this incredible opportunity, Sophie plans to become a software engineer and is hoping to go into the financial industry in the future.